Player avatars and "immersion" in VR 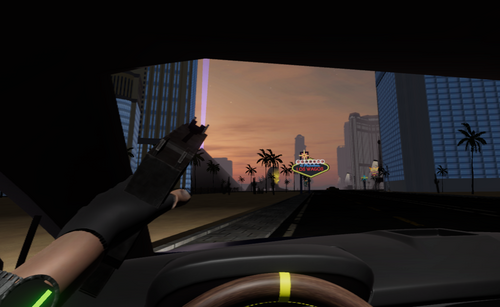 Today we're here to talk about the impact that a "realistic" player avatar and animated/tracked "hands/fingers" have on the overall immersion of a virtual experience based on our time working with the amazing VR community on UndercoVR.

During the development process over the numerous testing builds we're unleashed over the last year by far the biggest "complaint" if you will was the placeholder "player avatar" and "hands", which have been updated to utilize our new avatar, hands and player clothing systems in the latest public update.

Previously we had been utilizing a basic set of non animated hands along with a simple ik "arm" setup and a very basic "torso", while it helped to shape the outlines of the coming system and provided a base to work on the lack of finger animations and hand poses was specifically was very distracting for a fair number of testers.

This struck a chord with us as a team and we realigned some resources to address this cosmetic issue and no surprise here, once again the community overall was correct.  The overall impact on immersion is actually fairly huge, just something as simple as seeing your hands grab items correctly and being able to make basic gestures really helps you mentally "assume" the character you are embodying to that next level.

From this experience overall we learned a valuable lesson in not overlooking the immersive and "fun factor" values of basic cometic features,  as a result our amazing playtesters got what they asked for and as a team we were able to learn a valuable lesson about what the average vr user wants to see in their games.

Of course the actual avatar "body" also plays a huge part in immersion as well based on the feedback we were getting even the basic placeholder "torso" was a cool feature, people seemed to like being able to look down and see your torso, blood stains on your shirt and all and we got a lot of feedback that having a "body" in game really was helping the player to embody the character further.

Armed with this feedback we made a concentrated drive to improve player presence overall, along with this improved avatar also comes with it choices in player wardrobe which was also a much demanded feature by the community and we're super happy to be able to deliver the basic groundwork for expanding these features and systems further in the future.  The main takeaway from our experience here has been that we should never underestimate the value of a technically "cosmetic" feature and the potential massive cascading impact such seemingly trivial features can have on immersion.

As we continue the process of development we look forward to further opportunities to work hand in hand with the amazing and rapidly growing VR community to ensure we're hitting the mark.

As always your feedback is welcome via our official discord:  https://discord.gg/undercovr

Don't forgot to wishlist on Steam as well: https://store.steampowered.com/app/1047660/UndercoVR/

The current public alpha build can be downloaded  @ : https://studiovr.itch.io/undercovr-testing-build

If you enjoy what we are doing please consider becoming a patreon: https://www.patreon.com/studiovr

As always it's a pleasure to be producing cool things for such an awesome community, without you folks we couldn't do what we do, thank you all for your continued support, feedback, witty banter, bug reports, and moral support!